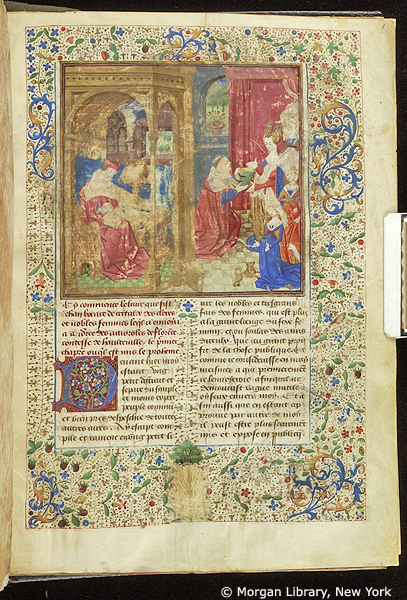 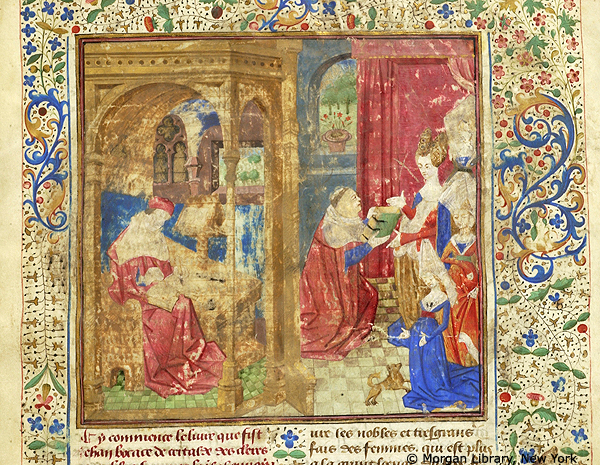 De Mulieribus Claris: Scene, Boccaccio writing -- At left, Boccaccio, wearing red hat, is seated on chair, writing with right hand in book on his lap. and touching page in the book with scraper held in left hand. He is seated next to table on which is inkpot (?), another object, and lectern on which is open book.
Scene below architectural canopy supported by columns. In background are window with two lancets with quatrefoil in spandrel between them, and square window.
De Mulieribus Claris: Scene, Boccaccio presenting De Mulieribus Claris to Andrea dei Acciaiuoli -- At right, Boccaccio, tonsured, kneeling, extends with both hands book to Andrea dei Acciaiuoli, wearing headdress, standing below canopy (?), her hands extended toward the book. Woman, wearing headdress, stands next to her. Another woman, wearing hennin, is in foreground, looking down toward and extending hands toward small leaping dog.
Scene in room with window through which trees are visible; pot containing blossoming plant on window sill.