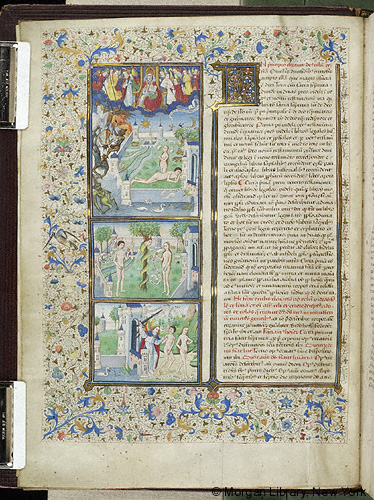 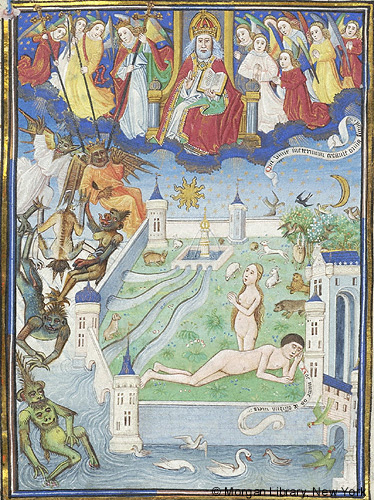 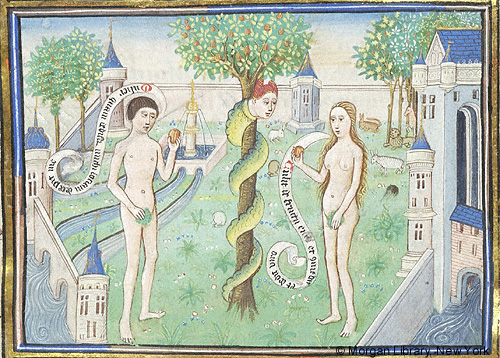 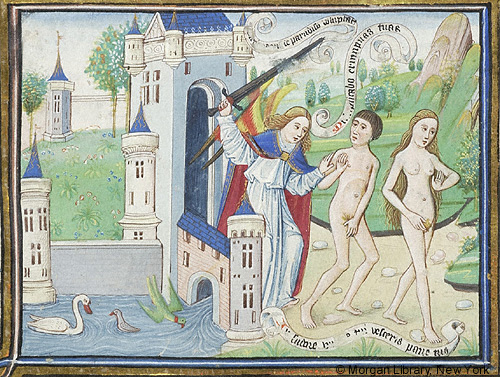 Creation Scene, Angel: Fall and Eve: Creation -- In cloud-edged arc of heaven, God, nimbed, wearing triple crowned tiara, sits on throne and makes gesture of blessing with his right hand. In his left hand he holds open book with pseudo-inscription. At right are angels, kneeling with joined hands raised. Below arc is scroll with inscription from Ecclesiaticus 18:01, QUI IN ETERNAM CREAUIT OMNIA SIMUL.
At left are three angels, one of which wears crown. They each hold cross staffs in both hands, with which they touch Lucifer, crowned, winged, falling from heaven, beside bestial devil. Below, four additional devils fall.
Below arc of heaven is walled Garden of Paradise, surrounded by moat, floating on which are swan and three other birds. Four birds fly above the moat. At right is gate with open portal and bridge.
Within wall is fountain from which flow four rivers. Beside the fountain, Eve, nude, with joined hands raised, emerges from side of Adam, nude, reclining on ground. By his mouth is scroll with inscription HOC NUNC OS DE OSSIBUS MEIS. In garden are rabbits, dog, sheep, deer, lion, and birds. Above are sun and moon in starry sky.
Adam and Eve: Fall of Man -- Female-headed serpent (Lilith) is entwined around tree with fruit. She is flanked by Adam, nude, covering his nakedness with leaf, holding fruit in left hand, and Eve, nude, covering her nakedness with leaf, holding fruit in right hand. Beside Adam is scroll with inscription, MULIER QUAM DEDISTI MIHI SOCIAM DEREDIT ME, and beside Eve is scroll with inscription, TULIT DE FRUCTU EIUS ET COMEDIT ET DEDIT UIRO.
Scene is in walled garden, surrounded by moat, within which is fountain from which flow four rivers. In garden are rabbits, lion, horse, and sheep. At right is gate with open portal and bridge.
Adam and Eve: Expulsion -- Angel, holding sword in right hand, stands on bridge in front of gate with open portal. With left hand, angel touches arm of Adam, nude, covering his nakedness with his left hand, beside Eve, nude, covering her nakedness with her right hand. Three scrolls beside figures read DE PARADISO UOLUPTATIS, MULTIPLICABO ERUMNNAS TUAS, and IN SUDORE UULTUS TUI VESCERIS PANE. Figures are in landscapse setting.
At left is walled Garden of Papradise, in front of which is moat in which float swan and signet. Above the moat flies bird.
Margins are decorated with floreate border, including cornflowers, inhabited by bird.