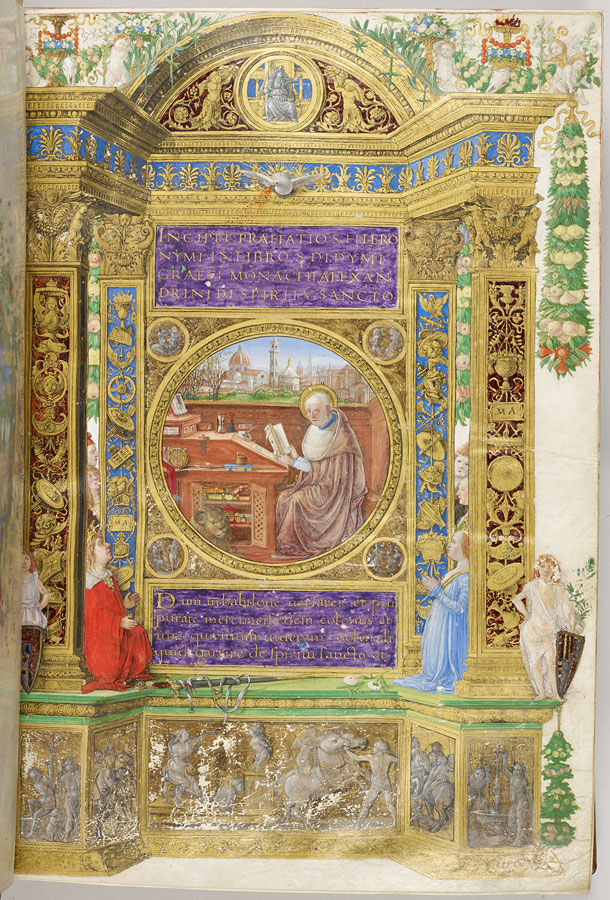 Large medallion: Jerome, nimbed, holding open book with both hands, is seated on bench, looking out at viewer. His left hand and the book rest on slant-top desk on which is leaf of parchment, and inkpot with pen. On upper part of the desk, book rests on stand, atop box with three drawers, one of which is open. In front of the box are hourglass, bell, and three keys, one of which dangles over side of the desk. On ledge along side of the desk are red sash, glass pitchers, plate, glass bowl, and book on which is small pot. Doors on lower part of the desk are open showing shelves on which are books and cardinal’s hat. Lion, partially visible in foreground, is bleeding from thorn in wound in front paw. In background is view of Florence showing cathedral, bell tower, baptistry and other buildings, including another church. Medallion is flanked by four smaller medallions enclosing putto astride hybrid (?); two nude figures standing; draped man, seated, facing back-turned nude man; three (?) figures, including one nude man. All is enclosed in architectural frame: In lunette at top of frame, medallion encloses personification of Justice, wearing helmet, raising sword with right hand holding scales with raised left hand, seated on throne decorated with busts. Medallion is flanked by two putti, lower part of body as foliage, holding foliate ornament in raised hands, surrounded by vining floreate ornament. Below the lunette, illusionistic dove of Holy Ghost hovers amid rays, stream of blood or fire emerging from bill. Pillar and pilaster on each side of the frame are decorated with classical motifs including winged heads; putti; foliate ornament; fish; winged busts of women; cornucopias; shells; crossed torches; vase with flowers. Also included are, wheel, shield and arrows, plaques inscribed with monogram M(ATHIAS) A(UGUSTO); bird; helmet and sword; pitcher; and vase. Between pillar and pilaster on left, Matthias Corvinus, crowned, hands extended, kneels, looking up toward Jerome. Before Matthias, sheathed sword is on ledge. Behind him, son and librarian, Taddeo Ugoleto, are visible. On opposite side, wife of Matthias, Beatrice of Aragon, crowned, with joined hands, kneels looking up at Jerome. Two roses are on ledge before her. Two women are partially visible behind her. Flanking the frame are two draped male (?) figures, each holding branch and shield decorated with emblems of Matthias Corvinus, including crow holding ring in beak. On plinth at base of the architectural frame are five panels on which are scenes in grisaille on gold: 1) Legend, Metamorphoses: Apollo flaying Marsyas -- In far left panel, Marsyas, nude, arms behind him, is seated with back to leafless tree; beside him, small nude figure, with hands raised, kneels next to Apollo (?), nude body draped, holding sword with right hand. 2) Two horsemen; figure standing between heads of the horses. 3) In center panel, in possibly march of triumph or victory, figure, possibly personification of victory, wearing olive leaf crown, nude body partially draped, holding disk (?) with right hand, extending raised left hand is seated on left end of platform. At right, on the platform, nude youth (?) crouches before pedestal atop which another nude youth kneels, hands tied behind his back. The platform is linked by chain to pair of rearing bridled horses. Putto stands on back of each horse; partially draped nude man holds reins of the horses. 4) Nude horseman confronting another horse; body on ground at horses’ feet; two figures, one wearing hat, in background. 5) Castalian spring as fountain is flanked by two nude figures, one male, each raising one arm, one probably Apollo. Architectural frame surmounted by putti holding garlands of fruits, including pears (?) and flowers including lilies and roses as well as wheat, pine cones, and pomegranates; tiered vases decorated by strings of beads and flowers, animal skull, foliate crosses.