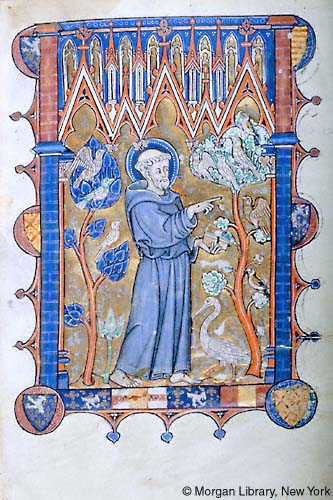 Francis of Assisi: Scene, preaching to the Birds -- Francis of Assisi, pearled nimbus, tonsured, wearing a monk's habit, with stigmata in his hands and feet, holds a book with one strap in his left hand. He raises his right hand, indicating one of birds in two flanking trees. Scene within Gothic architectural frame decorated with cusps of foliate terminals, and six heraldic shields, including Moreuil (three) and Count of Grandpr³b (one), in medallions, and four heraldic devices including Moreuil and Hangest.