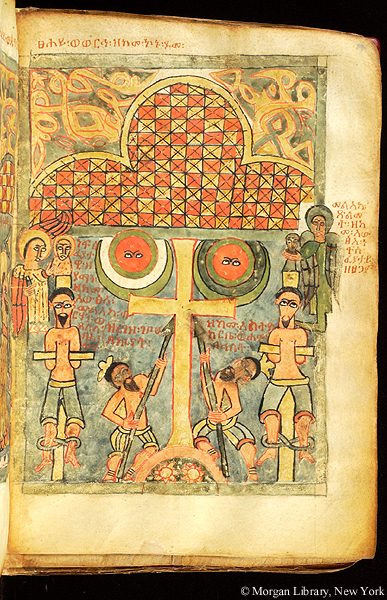 Under architectural setting of trefoil arch, Christ: Crucifixion -- Cross with flaring arms (Christ not represented) on mound within which are two stars, flanked by sun and moon, both red, inscribed “The sun and the moon, how they became blood” (Ge’ez), Longinus inscribed “His side was pierced with a spear” (Ge’ez) and Stephaton inscribed “He is given to drink, on a reed, myrrh mingled with gall” (Ge’ez), each wearing trilobed hat and trousers (torsos bare), holding spear,
and by two thieves wearing trousers (torsos bare), bound to crosses, bust of the nimbed Personification of the Soul of the good thief (viewer’s left) held by nimbed angel inscribed “Soul of the thief on the right, how the angel of light brought it forth and covered it with his wings” (Ge’ez), and bust of the Personification of the Soul of the bad thief (viewer’s right) held by nimbed? angel with one arm and one leg, inscribed “The angel of darkness, how he brought forth the soul of the thief on the left” (Ge’ez).