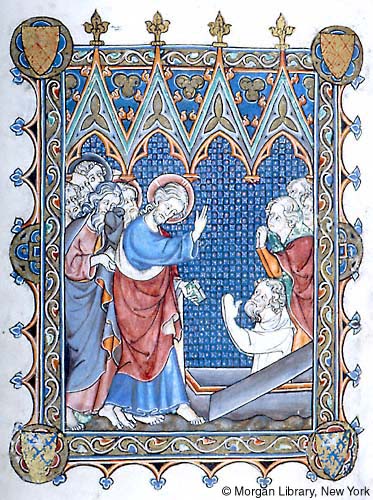 Christ: Miracle of raising Lazarus -- Two nimbed apostles and four men, including one raising his draped left hand toward his face and holding a book in his right hand, stand behind the cross-nimbed Christ. He holds a book with one strap in His left hand and raises His right hand toward Lazarus wearing a shroud, with his joined hands raised, emerging from a sarcophagus with a lid removed to the side.To right are three women, including Martha of Bethany and Mary of Bethany, one raising joined hands.
Scene with patterned background, within Gothic arcade and foliate frame decorated with cusps of foliate terminals, and four heraldic shields, including Moreuil (two), in four of six medallions (two as halves).