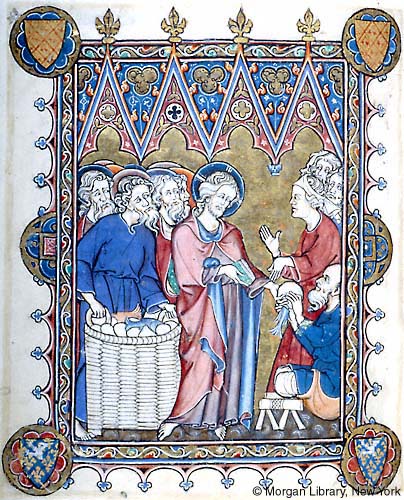 Christ: Miracle of Loaves -- Seven nimbed apostles stand behind the eighth nimbed apostle holding handles of a basket of loaves and fishes. All are behind Christ cross-nimbed, holding a book in His right hand, with His left hand extending a loaf to hands of a cripple seated with his stumps supported on hand crutches, and holding a fish in his right hand. Four men, including one wearing a kerchief, are gesturing toward Him. Scene with gold background, within Gothic arcade and foliate frame decorated with cusps of foliate terminals, and four heraldic shields, including Moreuil (two), in four of six medallions (two as halves).