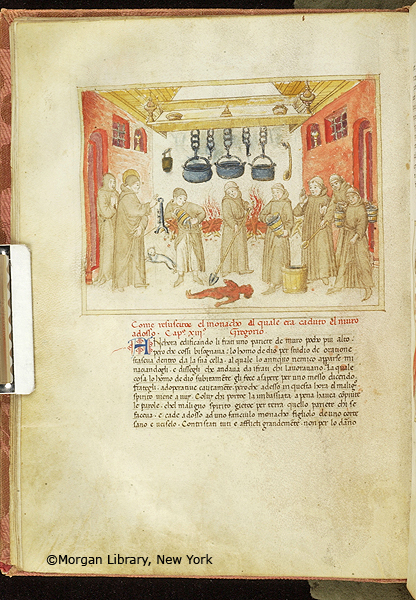 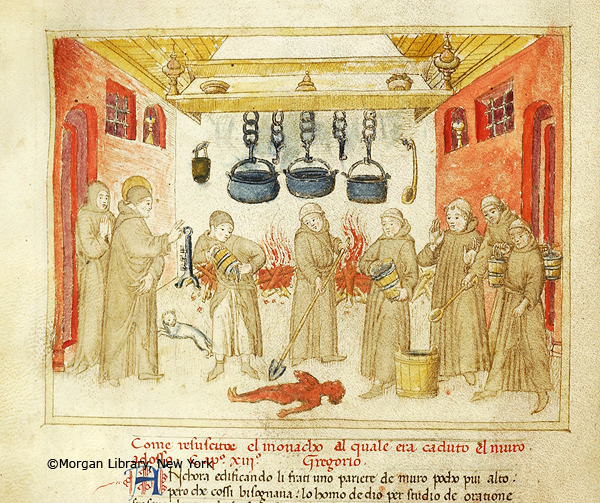 Benedict of Montecassino: Scene, Fire in Kitchen -- Accompanied by one monk, wearing hooded habit, with joined hands raised, Benedict of Montecassino, nimbed, bearded, wearing cap and hooded monk’s habit, raises right hand in blessing toward group of six monks, including one, wearing cap, holding bucket from which he pours water on red Idol of nude male on ground, among the five other monks, one holds spade, one holds bucket, one holds spoon, and one holdss yoked buckets over shoulder, all are tonsured and wear monk’s habits; amid the monks, cat departing to left. In background, three kettles suspended from pothooks, and two other pothooks, above fire, in hooded fireplace with andirons, flanked by basket and spoon hanging on wall. Above on the decorated hood mantle are bowl and bowl laden with food, candles in two arched wall niches. Scene in kitchen with wooden ceiling and two arched doorways. Miniature within frame for Chapter 10 of Book II of Dialogues; A fantastical fire, devised by the devil and ignited by means of an idol, is believed to burn the monastery kitchen.