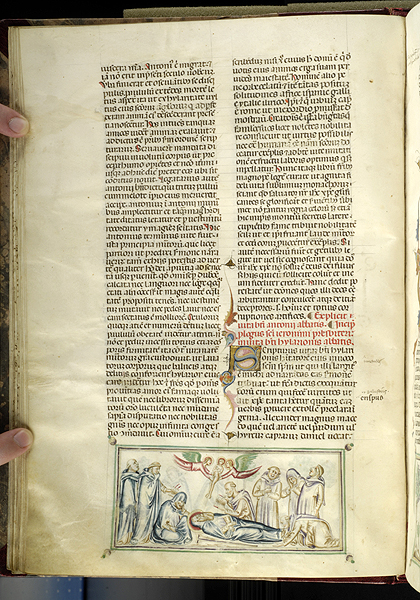 Anthony Abbot the Great: Scene, Death -- Anthony Abbot the Great, nimbed, wearing hooded monk’s habit, eyes closed, with arms crossed on waist, lying supine on ground beside tau-staff. At his head, among three tonsured monks wearing monk’s habits, one with open mouth, one raising draped right hand to face and with left hand holding open book with pseudo-inscriptions, one hooded and kneeling, raising hand to face.
At the Anthony’s side and feet, among five tonsured monks wearing monk’s habits, one kneels, reading from open book with pseudo-inscriptions, one wringing hands, one hooded, with joined hands raised, one with open mouth, and another kneeling and lowering face to his feet. Above him, his nimbed and nude soul is borne to heaven by half-figures of two angels.
Scene from Athanasius, Life of Anthony Abbot the Great.