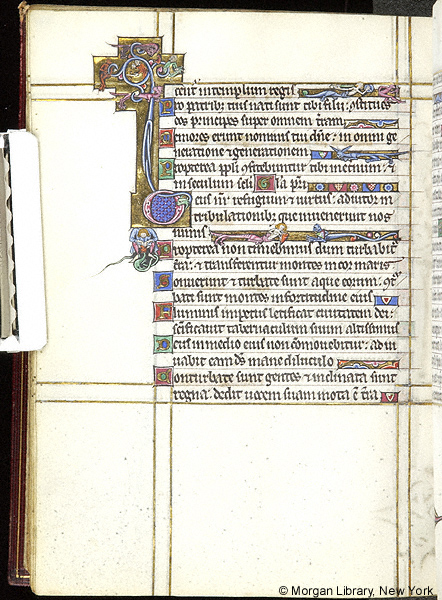 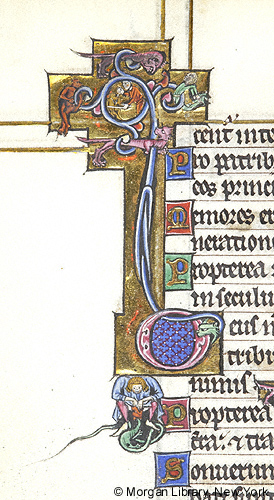 Initial D decorated with diapered infilling, and adjoined by fantastic animal with knotted body and tail of foliate tendrils amid which are two monkeys, one young seated on bench, before man holding rod and leash around the young (animal-training), woman dancing or performing acrobatics by bending backwards and grasping her feet with her hands, and animal, in upper margin.
Below the initial spandrel, male figure as caryatid, seated, with hands toward open jaws of fantastic animal.
Line ending: heraldic escutcheon of Boisleux, and fantastic animal.
Line ending: two escutcheons, one gules, a cross argent, and the other Neuville-Vitasse.
Line ending: nude male figure, in jaws of animal, and animal hybrid, both jousting with poles and shields, one with heraldry of Boisleux.
Line ending: escutcheon of gules, a bordure argent.
Line ending: escutcheon of gules, a bordure and a canton argent.
Line endings: geometric and foliate ornament.
Text page of Psalm 046 (Vulg., 045) in Third Nocturn of Matins of Hours of the Virgin.