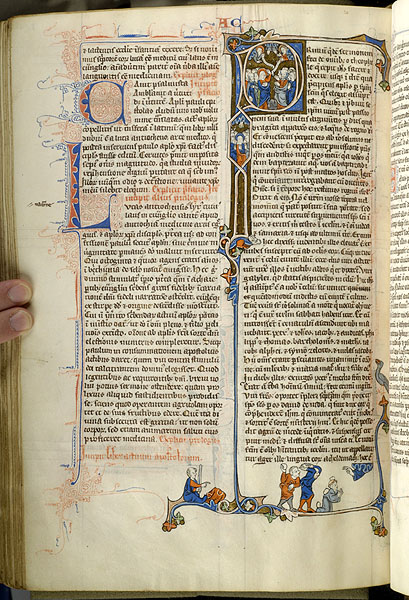 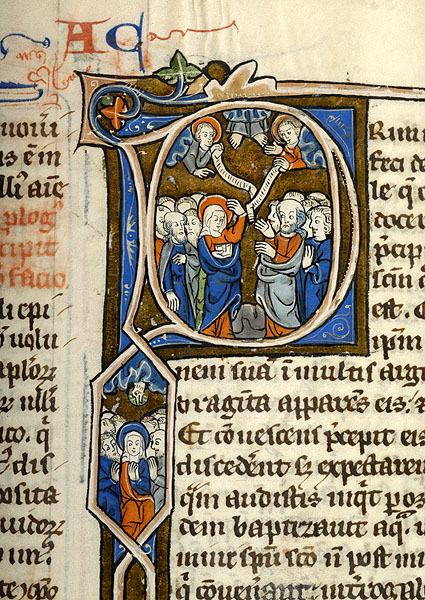 Beginning of Acts of the Apostles.
Christ: Ascension -- Within decorated initial P are feet of Christ, flanked by half-figures of nimbed angels holding scrolls with pseudo-inscription and emerging from cloudy arcs of heaven. Below is Virgin Mary, nimbed, veiled, holding book in right hand and raising left hand. She is surrounded by twelve apostles, most with only tops of heads visible.
Pentecost -- In descender of decorated initial P is head of dove of Holy Ghost, cross-nimbed, emerging from cloud. Below is Mary, nimbed and veiled, seated with joined hands raised, surrounded by apostles, most with only tops of heads visible.
Stephen Protomartyr: Stoning -- In lower margin, man, holds sword in left hand and extends right forefinger. He is seated beside garment. At right are two tormentors, one with stone in raised right hand and one raising stone with both hands. They face Stephen Protomartyr, tonsured, kneeling with joined hands raised, with stones on his head, back, and feet. He looks up toward hand of God in gesture of blessing, emerging from cloudy arc of heaven.