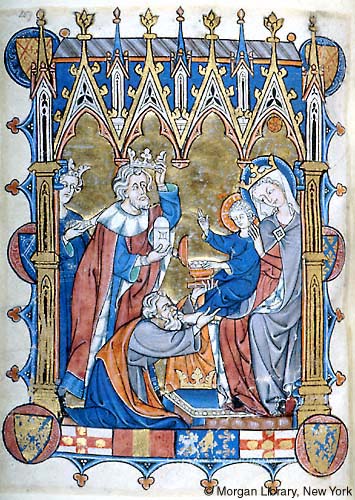 Magi: Adoration -- Among the three Magi, the youngest magus, crowned and beardless, holds gift; the middle-aged magus with his left hand removes crown from his head and holds vessel in his right hand; and the eldest magus, with his crown and the eldest magus, with his crown on podium, kneels with his left hand extending open vessel of coins, and kisses left foot of Christ Child, decorated crossed nimbus, raising His right hand in blessing and placing His left hand on coins, and placing His left hand on the coins, seated on lap of veiled and crowned Virgin Mary, nimbed, supporting Him on her right knee, seated on bench, with feet on the podium; Star of Bethlehem above.
Scene within Gothic architectural frame decorated with cusps of foliate terminals and six French heraldic escutcheons, including Moreuil (three), in medallions, and heraldic devices of Hangest and Moreuil.