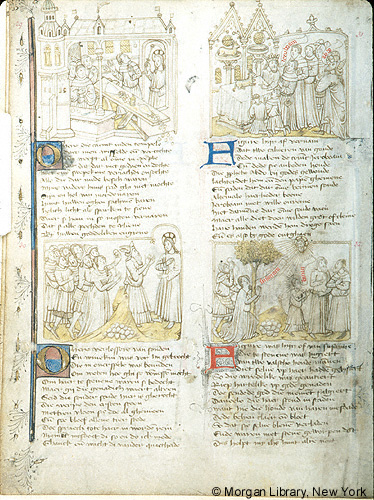 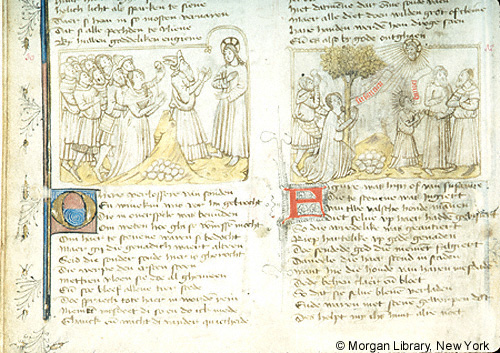 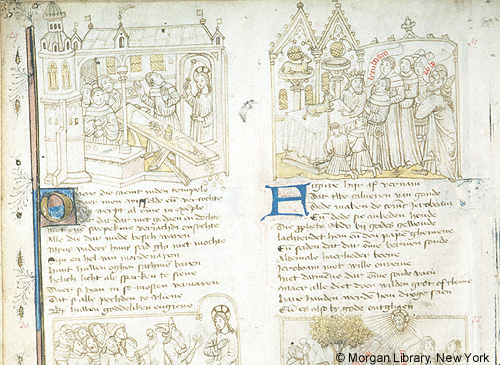 Zone 1:
1) Christ: Purging of Temple -- Within temple, beside falling table on which is money, are four men, one of whom is monk (?). On other side of table is man, arms raised, standing before Christ, crossed nimbus, standing in doorway holding scourge raised in right hand.
2) Jeroboam: Golden Calves -- One of two golden calves is on draped altar; the other is on one of two pedestals behind altar. Before altar, two smaller male figures kneel, one holding lighted candle. At side of altar, stands Jeroboam, crowned, name inscribed IEROBOAM on scroll, left hand indicating calf on altar. He is looking over left shoulder at group of men including one with small sack on belt, tonsured monk, soldiers wearing helmets, and man, name inscribed ABDO on scroll, wearing pointed hat. Scene is in architectural setting.
Zone 2:
1) Christ: delivering Adulteress -- Woman, hands joined and raised, stands at front of crowd of men, foremost of whom, possibly soldier, has right arm around her waist and holds stone in raised left hand. She stands behind man wearing high priest's miter, his arms raised, standing before Christ, crossed nimbus, right hand on breast, left hand extended. Pile of stones is on ground in foreground. Scene is in landscape with small mound.
2) Susanna: accused by Elders -- Soldier, right arm raised holding stone in right hand, stands behind Susanna, name inscribed SUSANNEN on scroll, kneeling, her hands joined around tree next to pile of stones. She is looking up toward head of Christ-Logos, cross nimbed, emitting rays. At right, Daniel, rays as nimbus, name inscribed DANIEL on scroll, stands before two men who face each other. Scene is in landscape with small mound.