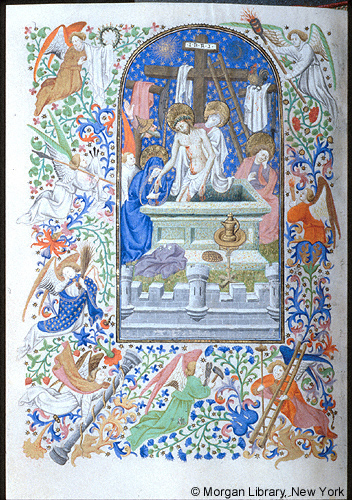 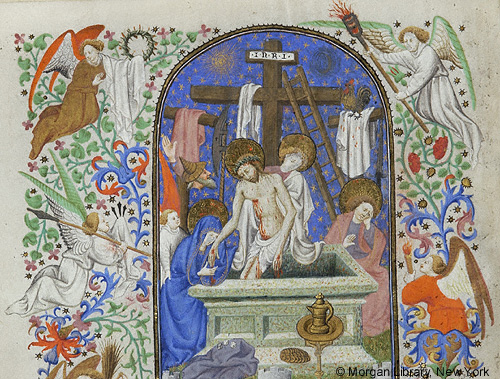 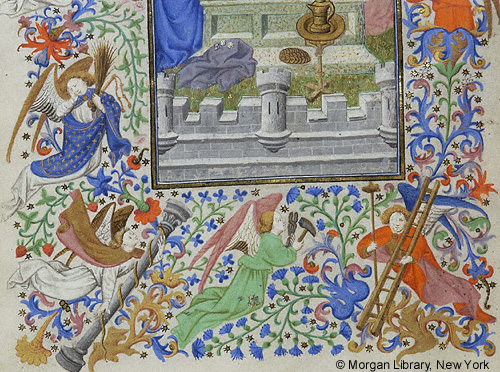 Christ: Deposition -- Christ, nimbed, wearing crown of thorns and short loin cloth, bleeding from wounds in side and hands, is lowered into sarcophagus-like tomb by Joseph of Arimathea, nimbed, who holds Christ with draped hands. Virgin Mary, nimbd and veiled, leans on left side of tomb extending her right hand toward right hand of Christ, holding His right arm with draped left hand. Angel stands behind her, touching her right side. Evangelist John, nimbed, is seated at right end of tomb, resting his head on his left hand. In foreground and background are Instruments of Passion including: three dice lying on garment; mound of coins; covered pitcher in basin on stand; hand; head of male figure wearing pointed hat; halberd; and three crosses. The center cross bears titulus INRI, and is flanked above by sun and moon. Garment is draped over left arm; ladder leans on right arm. Flanking it, are two tau crosses, each with garment draped over crosspiece, one with crowing cock perched on bloodied garment. All is behind crenellated wall with towers.
2) Margins decorated with border of floreate ornament, including rose and strawberry, and inhabited by eight angels holding Instruments of Passion, including crown of thorns in draped hand, large and small torches, spear and nails in draped hand, withes and scourge, column with rope, hammer and tongs, sponge on reed and ladder.