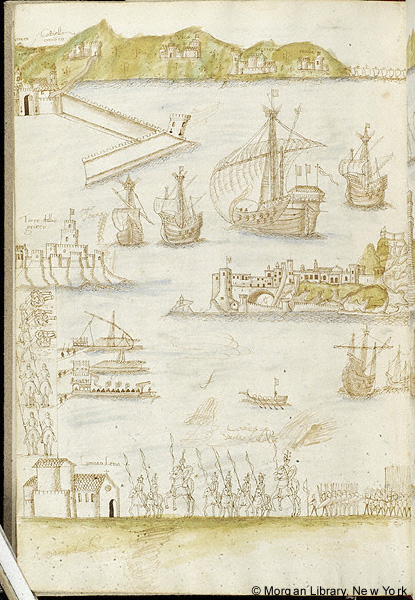 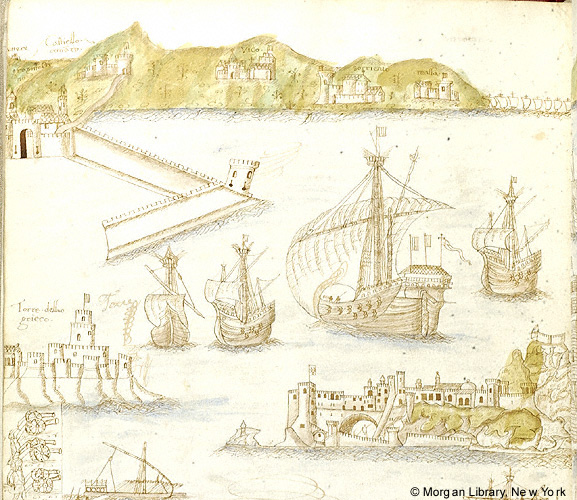 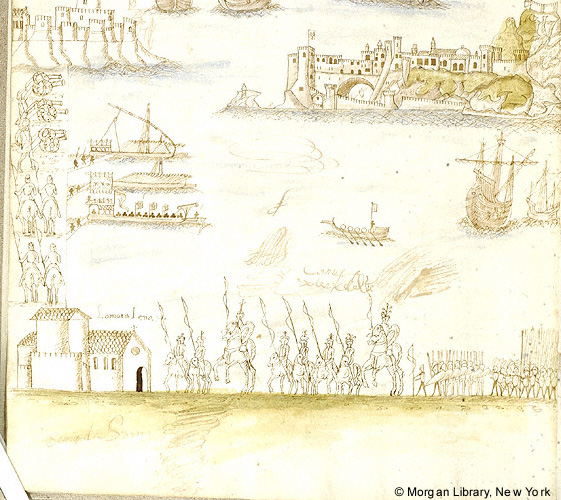 Cronaca della Napoli Aragonese: Scene, Liberation of Naples -- Page opening shows port of Naples. At upper left, cities around the port are labelled, including Castellamare (CASTIELLO AMMARO), Vico (VICO), Sorrento (SORRIENTO) and Massa (MASSA). At lower left, city of Torre del Greco, labelled TORRE DELLO GRIECO, possibly flying banner decorated with heraldry of Aragon, is next to beach where two soldiers stand next to six cannons, with four horsemen approaching. Next to them in the water, figures are on gangways of three ships, uppermost with war machine (?), the third with cannon, top two with oars. At bottom left, above church is inscription LAMATA LENA. To right of the church are eight horsemen, holding bannered lances (?) and foot soldiers carrying shields with either swords or spears. Ships nearby fly flag decorated with heraldry of Aragon (?).
On right, at top, island of Capri is labelled DE CRAPA. Two cities are on the island, one, possibly Capri labelled CRAPA, the other, possibly Anacapri, inscribed DONNA CRAPA. Castel Nuovo, flag, decorated with heraldry of France, flying over tower, is in center, next to hilly shore with buildings. Between Capri and the castle, are several ships, one possibly with banner decorated with heraldry of Aragon. Below, between the castle and long sea wall, or pier, are four ships labelled LARMATA FRANCESE.