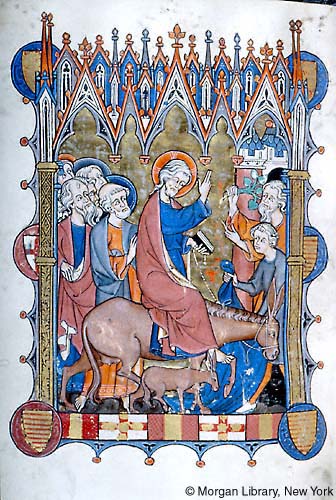 Christ: Entry into Jerusalem -- Six apostles, including tonsured Peter and two others as nimbed, stand behind Christ, cross-nimbed, holding a book in His left hand and raising His right hand. With reins in His left hand, He rides on an ass, beside a foal, both treading on a garment spread by a youth. Behind the youth is a bearded man raising a branch in his right hand and emerging from the city gate of Jerusalem. Scene within Gothic architectural frame decorated with cusps of ball terminals, and six French heraldic shields, including Hangest (one) and Count of Grandpr³b (two), in medallions, and heraldic devices, including Hangest.