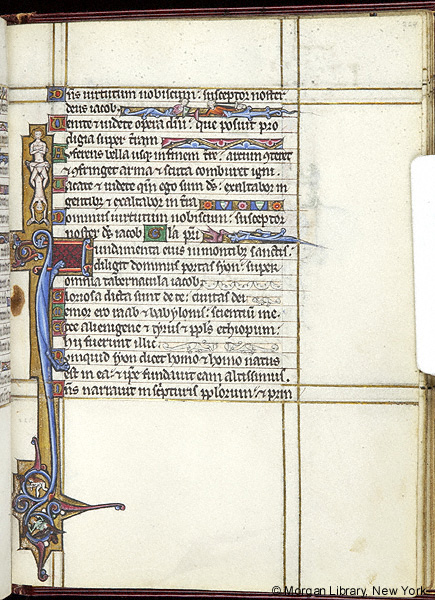 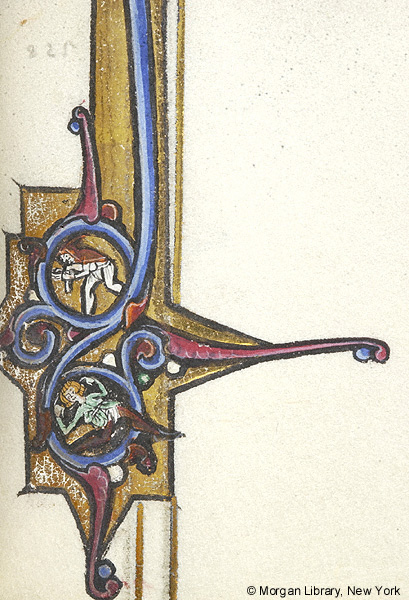 Initial F decorated with diapered infilling and foliate ornament, and formed by descender of fantastic animal with tail of foliate tendrils enclosing male musician, wearing flat-hooded cape, holding bagpipe and male dancer with raised hands pointing to his head, in lower margin.
Above the initial in left margin, two nude men wrestling, one standing upside down, surmounted by the other with arms crossed, each with legs crossed around the other.
Line ending: two men, in jaws of fantastic animals, fighting with swords and shields (one buckler), one with heraldry of vert, a fess argent (Burlesque: Fighting).
Line ending: two escutcheons, one Boisleux, and the other vert, a fess argent.
Line ending: bird pecking at protruding tongue of fox lying on its back (Bestiary: Fox feigning Death).
Line endings: geometric and foliate ornament.
Text page of Psalm 087 (Vulg., 086) in Third Nocturn of Matins of Hours of the Virgin.